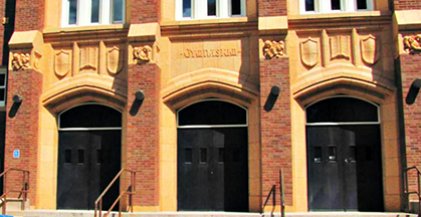 Home to quite possibly the coolest school mascot of all time, the Rough Riders, Theodore Roosevelt High School was established in 1922 as William G. Hibbard High School. It moved to this site at 3436 West Wilson Avenue and was renamed in 1927 after the 26th President of the United States, Theodore Roosevelt. Today its enrollment is approximately 1,500.

Carl Wanderer was a decorated war hero.  He saw action helping Gen. Pershing pursue Pancho Villa in Mexico, and he fought in the trenches during the First World War.  After the armistice, he returned to Chicago and married a young girl named Ruth Johnson.  Before long, however, Wanderer’s contentedness waned.  So he hatched what he thought was a brilliant plan.

He hired a drifter allegedly named Al Watson to follow him and his wife home from the theater one night and stage a hold-up.  Wanderer told the drifter that he wanted to impress his wife by fighting off a would-be thief and saving the day.  So, on the evening of June 21, 1920, Carl and Ruth were returning to their home at 4732 North Campbell Avenue following the evening entertainment, and Watson was dutifully following close behind.  Once they reached the vestibule, Mr. Wanderer pulled two guns and fired – one at his wife and one at the drifter.  Both died.  When the police arrived, Wanderer gave them a full report:  Some vagrant followed his wife and him into the vestibule of their residence and tried to stick them up.  The vagrant pulled a gun and killed Ruth, at which point Carl pulled his own gun and shot the assailant.

The police accepted Wanderer’s story, but two local reporters grew increasingly suspicious.  They conducted their own investigation and determined that the gun allegedly used by Watson was purchased by Fred Wanderer, Carl’s cousin, and that Carl borrowed it from Fred shortly before the murders.  The police stepped in from there.  Under intense questioning, Carl Wanderer confessed.  He was arrested on July 10, 1920, and brought to trial for killing his wife, but convicted only of manslaughter, for which the sentence could not exceed 14 years.  Seeking a better result, the prosecutors brought him to trial again, this time for the murder of the drifter.  At the second trial, the jury wasted little time finding him guilty of murder and sentencing him to death.  On September 30, 1921, he was hanged at the Cook County Jail at Dearborn and Illinois.  In lieu of last words, he allegedly began to sing “Dear Old Pal Of Mine,” a highly popular song about a soldier on the front lines longing for his girl back home.  Wanderer kept right on singing after the hood was drawn over his head and sang until his neck snapped.