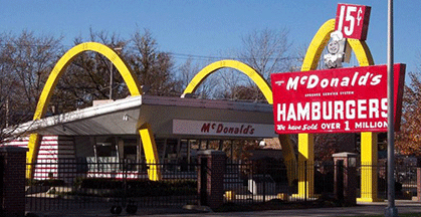 Ray Kroc opened the first McDonald’s restaurant at 400 North Lee Street, Des Plaines, Illinois on April 15, 1955.  The original building (which had undergone several improvements) was torn down in 1984 and rebuilt according to the original blueprints, with a few modifications to allow for the creation of what is now a museum.  The equipment on site is authentic, and the mannequins are adorned in the original uniforms worn by the staff.

The museum is opened seasonally for tours. 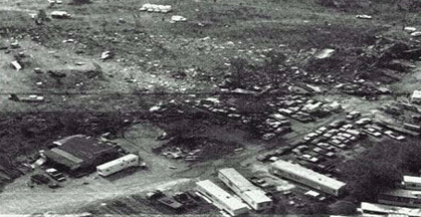 American Airlines Flight 191 crashed moments after takeoff on May 25, 1979, when one of the engines detached and flipped over the left wing of the aircraft, causing the plane to rotate to an angle of 112 degrees and crash into a trailer park. All 258 passengers and 13 crew members were killed on impact. Two mechanics at a nearby garage were also killed, and three nearby residents were injured by falling debris.

The flight was headed to Los Angeles and began its takeoff from O’Hare at 3:02 p.m. It remains the deadliest airline tragedy ever on American soil.