In this club scene at Sound Bar at 226 West Ontario Street, Batman fights to get to a Gotham crime lord. 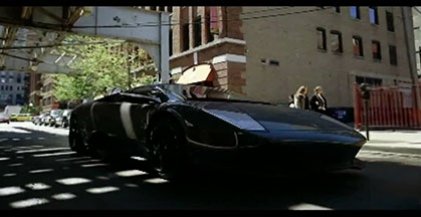 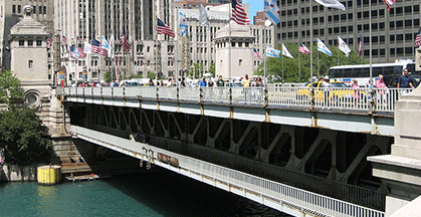 The Untouchables - Meeting Between Ness and Malone 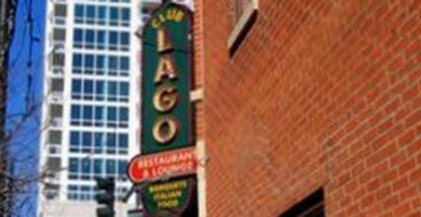 Gus and Ida Lazzerini opened this northern Italian restaurant in 1952 in what was then a heavily industrial neighborhood rich with printing companies and paper salesmen at 331 West Superior in the River North neighborhood of Chicago.  They passed control to their son-in-law Francesco Nardini in 1980, when the locals were mostly photographers and art dealers.

The restaurant is now in its third generation and is operated by Francesco's sons GianCarlo and Guido, who serve the same family-style Italian fare in a neighborhood now flooded with condominiums and warehouse lofts.  The restaurant, with its nautical-themed interior, still looks much the same as it did back in the 1950's, and its tin ceiling dates back to 1893. 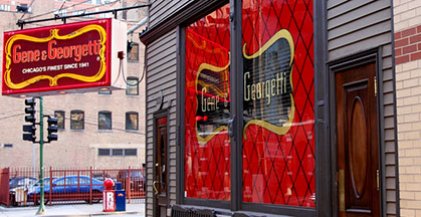 Gene & Georgetti, Chicago's oldest steakhouse, has been serving prime cuts from the same historic location since 1941 at 500 North Franklin in River North.  Gene Michelotti, an Italian emigre and avuncular host, and his chef friend, Alfredo Federighi (nicknamed "Georgetti" after a famed Italian cyclist), breathed life into their American dream in this wooden building, erected in 1872 shortly after the Great Fire.

Today, this Chicago institution, a longtime haven for celebrity diners, is operated by Tony Durpetti, who grew up a few doors down from the restaurant and married Gene's daughter, Marion.  The chef, the bartender, and many of the waitstaff have been mainstays of the restaurant, many having worked there for several decades. 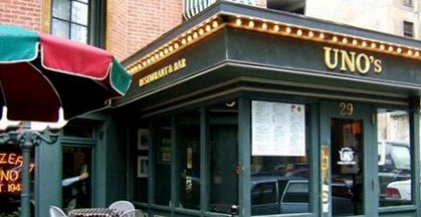 Ike Sewell (an All-Southwestern Conference guard for the University of Texas football team in 1924) and his italian-born business partner Richard Novaretti (otherwise known as Ric Riccardo) created the world's first deep dish pizza at 29 East Ohio Street in 1943, although some sources report that the concept was actually developed by their chef, Rudy Malnati.

The restaurant was originally known as "The Pizzeria" and then became "Pizzeria Riccardo."  The deep dish pizza was so popular that in 1955 they opened a second pizzeria a block away at 619 N. Wabash, where it (too) remains today.  The second restaurant was named "Pizzeria Due," and, upon its opening, the original restaurant at this location was renamed "Pizzeria Uno."  Today, Pizzeria Uno is a national chain, but old school Chicagoans know that it was born at this very location.  (Incidentally, the guy who typically gets the credit for starting it all, Ike Sewell, died of leukemia in 1990 at age 87.) 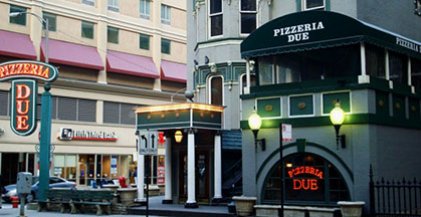 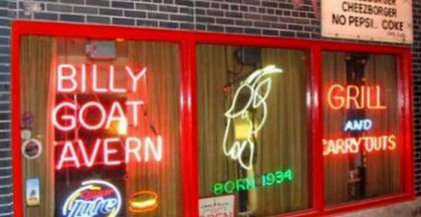 The Billy Goat Tavern has easily achieved more notoriety than any burger joint in Chicago history.  Originally opened in the shadow of the old Chicago Stadium by the eccentric William (Billy) Sianis in either 1934 or 1937, it gained its first blast of publicity in 1944, when Billy hung a sign saying "No Republicans Allowed" during the Republican National Convention.

The following year, the Billy Goat Tavern became indelibly and supernaturally entangled in the city's sports history.  Before the fourth game of the 1945 World Series, with the Cubs leading the Detroit Tigers two games to one, Sianis attempted to bring his pet billy goat into Wrigley Field, but was turned away, allegedly by William Wrigley himself and allegedly because the goat smelled bad.  Sianis, angry and upset, retaliated by purporting to place a curse on the Cubs, vowing that they would never again return to the World Series.  The hapless northsiders went on to lose the 1945 affair and, ostensibly because of the "Curse of the Billy Goat," have not returned since, despite being painfully close on a number of occasions.  Some observers of paranormal activity insist that the curse reared its ugly head in the form of a black cat tiptoeing past Hall-Of-Famer Ron Santo at Shea Stadium shortly before the Cubs blew a monumental first-place lead during the 1969 season.  Other mediums of the supernatural claim that the curse caused a routine ground ball to pass unobstructed through Leon Durham's legs in the 1984 National League Championship Series.  Still other psychic observers assert that the curse reappeared in the form of Steve Bartman in 2003.  The Billy Goat Tavern relocated to 430 North Michigan Avenue (Lower Level) of Michigan Avenue in 1964 and soon became a favorite lunching spot for journalists at the Chicago Tribune and the Chicago Sun-Times, most notably Mike Royko.  Bill Murray, a frequent diner, made the Billy Goat Tavern the subject of a famous Saturday Night Live sketch in which the proprietors famously shouted "Cheezborger, cheezborger, cheezborger!" and replied, "No Coke.  Pepsi."  (Or "No Fries.  Chips.")  Today, there are several additional BIlly Goat locations around the city, and it's "No Pepsi.  Coke." 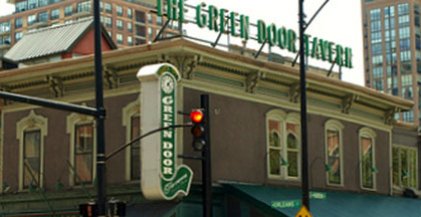 Just after the Great Fire incinerated most of Chicago in 1871, a local engineer named James McCole built a two-story, balloon-frame wooden structure with a detached garage at the southwest corner of Huron and Orleans.  A few months later, the city council passed an ordinance prohibiting the construction of wooden buildings in the downtown district, making McCole's structure one of the few remaining wooden structures built prior to the "new" law.

In 1921, a man named Vito Giacomo opened a restaurant on the first floor, replacing a grocery store that operated there for the preceding 49 years.  The restaurant, known as "The Green Door," snuck through the Prohibition era as a speakeasy (which apparently explains its name).  The building tilts slightly toward the north because it began to settle into the Earth in the early 1900's.

Harry Caray was a frequent visitor, and one of his Budweiser commercials was even filmed here at 678 North Orleans Street.  The tavern, which has changed very little through the years, is peppered with such "bric-a-brac" as antique signs, posters, photographs, and other nostalgia.  What's more, the soap box car hanging from the ceiling was once used in a race in which Illinois native and former United States President Ronald Reagan once participated. 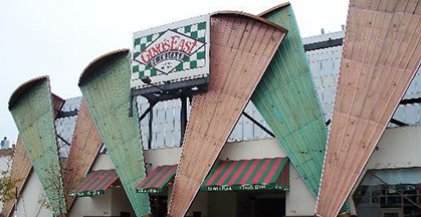 Gino's East was founded in 1966 at 160 E. Superior by two taxi drivers and their friend.  It soon became renowned for both its food and its heavily-scribbled upon interior.  In 2000, the pizzeria moved to this location (site of the defunct Planet Hollywood), along with the graffiti-covered walls and the pizza ovens.  In 2006, a second Gino’s East opened at essentially the original location of the first one.

(Note: Gino’s East should not be confused with the original Gino’s, which opened at 932 North Rush Street in 1954, decayed rapidly, failed to enjoy the same sterling reputation of Gino’s East, and ultimately closed in 2007.) 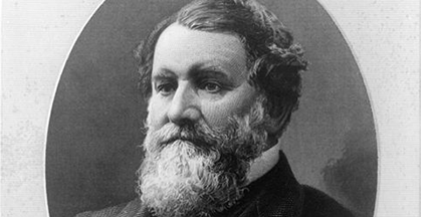 Inventor Cyrus McCormick's reaper changed the way farmers harvested wheat.  McCormick built a factory in Chicago in 1847, and then, after The Great Fire, built a new one at Blue Island and Western Avenues.  In 1902, his company was merged with a few others in the business and became International Harvester.  Today it's known as Navistar International Corporation.

McCormick built a mansion at 675 North Rush Street in1875, and the area became known as "McCormickville" because so many of his relatives moved nearby. 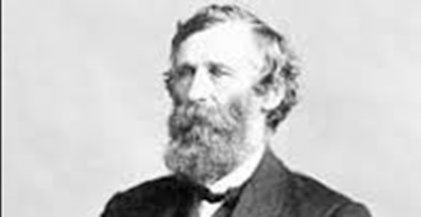 After Ellis Chesbrough, who resided at 933 North LaSalle Street, successfully designed Boston's water distribution system, the Chicago Board of Sewage Commissioners selected him to fix the city's water and sewage problem.  Chesbrough designed a two-mile tunnel, 60 feet under the lake, that began delivering clean water to the city in 1864.  He was the city's chief engineer for more than 20 years. 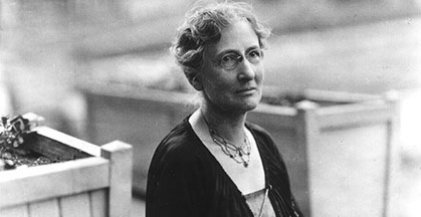 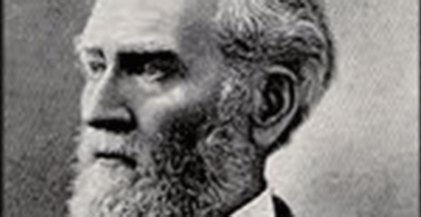 Journalist and mayor of Chicago Joseph Medill was managing editor and co-owner of the Chicago Tribune, and during his reign the paper adopted a strong abolitionist stance.  He and the Tribune played a significant role in Abraham Lincoln's nomination for the presidency in 1860.  As mayor, Medill created the city's first public library and reformed the police and fire departments.  Medill resided at 639 North Wabash Avenue. 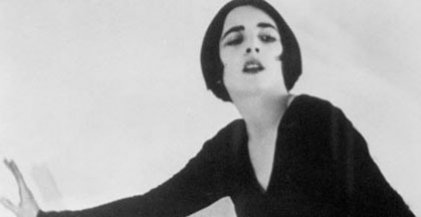 She's responsible for the city's annual performance of The Nutcracker, which she first directed and choreographed in 1965.  In 1970, she founded the Ruth Page Center for the Arts in the Gold Coast.  Page resided in an apartment in the Diana Court Building at 540 North Michigan Avenue. 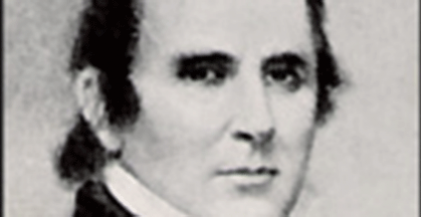 Just two years after arriving in Chicago in 1835, William Butler Ogden became the city's first mayor.  His plan to build a railway out of the city in 1847 was perhaps his most influential.  Ogden financed banks, ran a local brewery, designed the first drawbridge over the chicago river, and was president of Rush Medical College.  Ogden resided at 50 East Ontario Street.