Contrary to popular belief, large, "surfable" waves occur on Lake Michigan—just not nearly as often as in ocean surf spots. Since the best waves form during the fall and winter, Chicago's surfers must brave the icy swell of Lake Michigan during some of the coldest months of the year. "Most people's reaction is that you must be crazy, and you must freeze," says Rex Flodstrom, a Chicago-area native who began surfing while living in California. Surfer and photographer Mike Killion has been capturing Chicago’s surf scene since his college years. “People are always taken aback by the fact that these photos were taken on Lake Michigan,” he says.

Like ocean waves, Lake Michigan's waves are formed by strong winds blowing over the water. Whereas ocean waves are typically created by swell produced by storms hundreds of miles away that reach shore several days later, Great Lakes waves are often created by storms taking place overhead, causing them to be choppier and unpredictable. According to local surfer Eric Mayer, Chicago's waves are usually small, about two or three feet. But every now and then, six- to seven-foot waves form in Hyde Park. Surfers can find even larger waves in Indiana.

The best waves typically form from September to January, when the water temperature is warmer than the air temperature, producing more wind and waves. The lake is usually flat during summer, with the exception of a few solid days. "We surf until the lake freezes and then pray for an early spring," says Mayer. Since Chicago’s surfing season peaks during fall and winter, surfers need proper gear to protect them from the frigid water. “I can hang out for two-plus hours in 34-degree water with only my thumbs getting cold," Mayer says. His winter gear includes a 6-millimeter thick wetsuit with a hood, booties, and mittens, leaving only his face exposed. 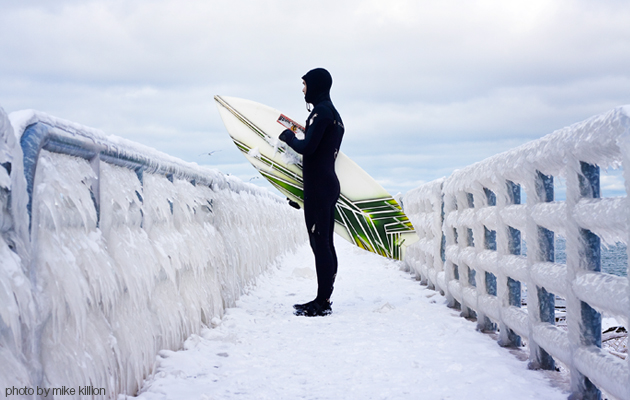 Because waves are unpredictable and may occur without much advance notice, a major component of Great Lakes surfing is monitoring weather conditions. The surfing community uses a variety of tools to predict waves, including wind maps, wave maps and data from weather stations scattered throughout the Great Lakes. On good days, a swell might last all day, but often, the waves are gone within several hours. Surfers who drive to Indiana in search of a good swell may end up sitting in their cars for a few hours waiting for the waves to pick up.

Surfing would likely be much more popular in Chicago if it weren't for the City's spirit of sharp disapproval towards the sport and the strict regulation across Chicago's beaches. Until recently, surfing was prohibited on all beaches in Chicago. After a fatal tragedy involving three girls and an inflatable raft several decades ago, the City placed a ban on all non-motorized flotation devices, including surfboards. Controversy erupted in 2008 when Chicago police arrested a man for surfing. The incident caught the attention of surfing activist groups, who hoped to lift the Park District's ban on surfing. In 2009, several beaches were opened to surfers.

From Labor Day through Memorial Day, surfing is allowed at Rainbow, Montrose, 57th Street and Osterman beaches. During the summer, surfing is allowed only at Montrose and 57th Street beaches, and only away from designated swim areas. Surfers who break the rules face penalties.  In fact, Flodstrom was arrested in January of 2012 for surfing at Oak Street Beach and ended up spending four hours in a holding cell in a freezing wetsuit. 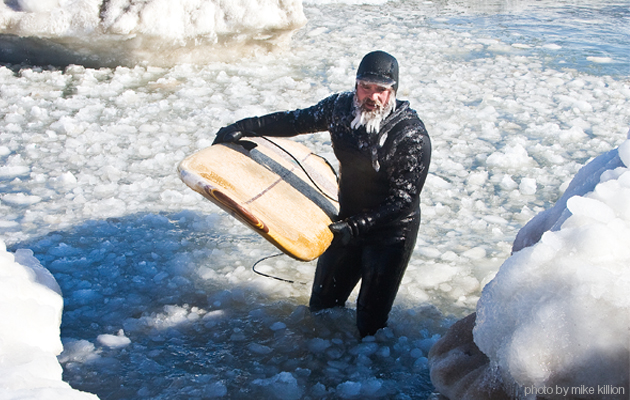 Some of the region’s best surf spots lay just south of Chicago, and many surfers prefer to venture to spots like “The Shoe,” named after the Horseshoe Casino in Hammond, Indiana. Although the backdrop of steel mills make these spots less scenic, the waves typically form better than in Chicago.

Check out more photos of surfing in and around Chicago and view more of Mike Killion’s work here.

What Renters Should Do if the Apartment Heat Doesn't Work