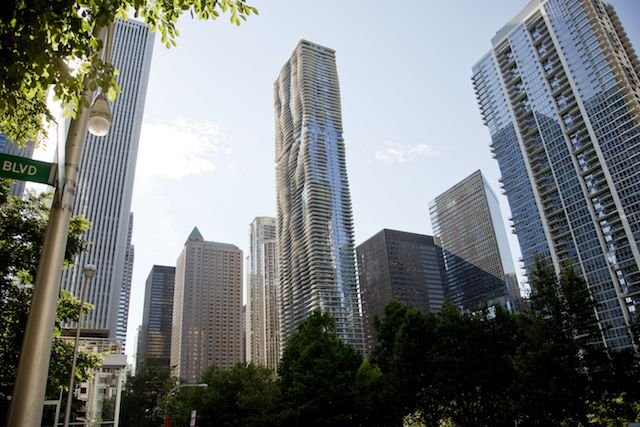 Chicago is a leading city among architecture buffs and design enthusiasts. Still, apartment renters don't need to be practicing architects or professional designers to appreciate all the good designs surrounding them. These properties on Domu right now could be cut as the most "Chicago" places to rent an apartment or condo, meaning they signify a vital building block in Chicago's architectural evolution or have a good deal of history built right into them.

Historic Places to Rent in Chicago 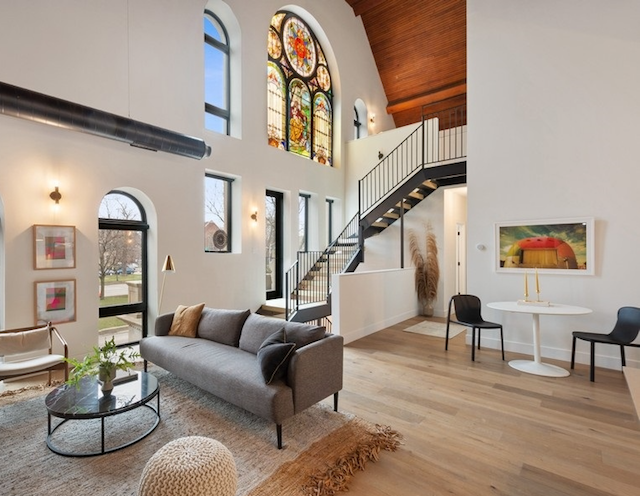 This building weaves a tale that would please both apartment renters and Logan Square neighbors who would like to see more preservation of historic buildings. The apartments at The Grand Logan Lodge take an existing structure that had been part of the neighborhood for generations, in this case, a former Presbyterian church, and convert it into modern homes for renters. The old church building is nicely preserved and reused as the template for apartments with lofty ceiling heights and original structural details. 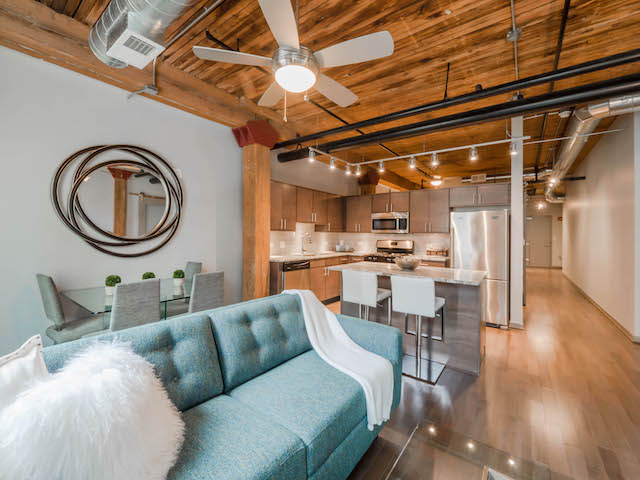 The Lofts at River East

Chicago is in a league of its own when it comes to tall building construction, but the waterfront property in Chicago is quite notable, too. Many of Chicago's most prized waterfront apartment properties got their start back in the days when Chicago's waterways were doing serious work to bring commerce into the growing metropolis. Since the Chicago River got its course reversed by engineers and much of downtown, including the waterfront parcels along the river, shifted from an industrial port to a prime location for residential properties, a few of the sturdy warehouses along the water became apartments or condos. The Lofts at River East are one of these outstanding repurposed buildings, boasting hundreds of luxury loft apartments for rent that offer balconies with views of the Ogden Slip, Navy Pier, and Lake Michigan. 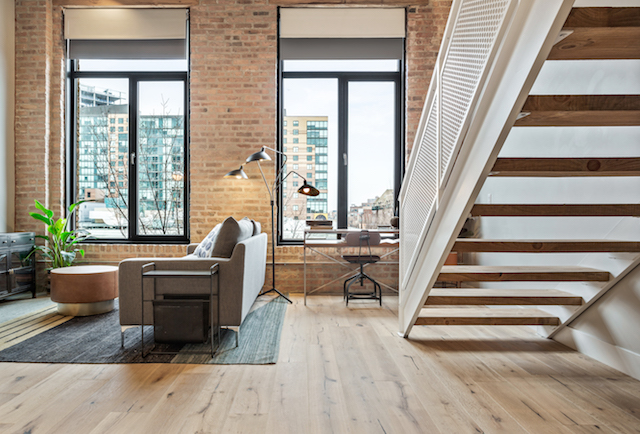 From lumber yard to luxury loft apartments, the location of this River West apartment building has witnessed some significant changes for 135 years. After its original use as a lumber yard, the building evolved to house a leather tannery and sporting goods manufacturer. As Chicago rushed to rebuild after the Great Fire of 1871, some contractors undoubtedly found it helpful to source lumber from this convenient spot south of Goose Island. Office space was to follow in the 1980s, and then the property was redeveloped to meet the needs of modern renters in Chicago. 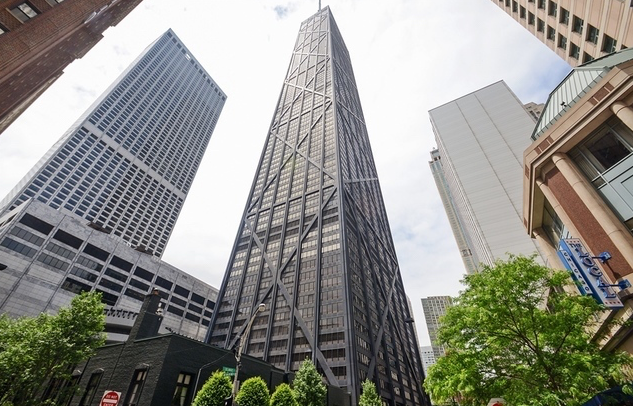 Ahead of its time in so many regards, the iconic skyscraper, better known by its former name, The John Hancock Tower, still provides some neat examples of how high-rise living is the future of urban living even though the building has stood in Chicago's Gold Coast neighborhood for more than 50 years. The building contains more than 700 residences, but it's also home to a grocery store, a fitness center, a 5-star restaurant, and a bar with the best views in town right at the top of the famous Signature Lounge. And even though the building is mainly made up of privately-owned condos, renters still get the occasional shot at living in this famous building. And if renters do happen upon a condo that's up for rent in 875 North Michigan, they won't have to travel very far outside their unit to take care of most of their day-to-day tasks. 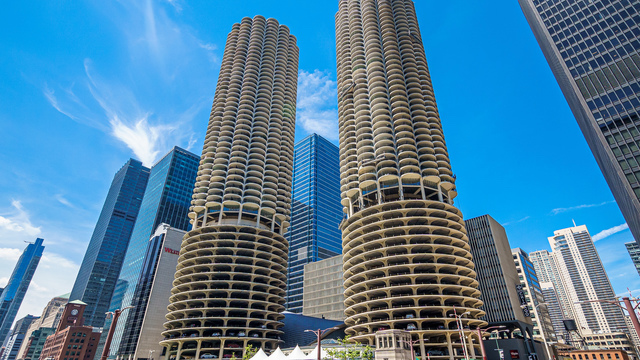 From architecture buffs to indie music fans, everyone can spot these iconic twin apartment towers in Chicago's River North neighborhood. The latter group may best know Marina City as the featured cover art from Wilco's 2001 album Yankee Hotel Foxtrot. Still, for everyone else who spends time in Chicago, the towers usually represent an unmistakable snapshot of Midwestern moxie and local pride. The towers are similar to two corncobs, which slightly mutes their tough concrete exterior and infuses a good bit of whimsy into the downtown cityscape. Residents at Marina City are maybe the biggest beneficiaries of the quirky design because each and every condo of the building comes with an impressively sized balcony. Hence, the views are second-to-none for the neighborhood. Boating enthusiasts will also appreciate that these 1960s-era marvels designed by Bertrand Goldberg come complete with, you guessed it, a marina built right into the base of the south tower along the Chicago River. 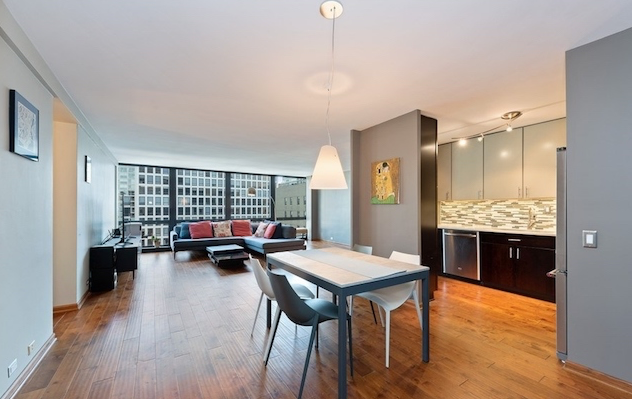 Every architecture boat tour that bobs its way along the Chicago River or Lake Michigan shoreline inevitably lands upon the steel and glass design aesthetic titan, Ludwig Mies Van der Rohe. Mies gets a lot of credit for shaping late 20th-century architecture, and he did a lot of work to that end in Chicago. One residence symbolic of Van der Rohe's pioneering minimalist principles is the apartments at 900-910 North Lake Shore Drive. Eschewing the heavy limestone facades of previous generations and the ornate terra cotta embellishments of the other lakefront mansions, these apartment towers are an elegant lesson in restraint. Engineering advances adapted from Van der Rohe's breakthrough office buildings in the Loop called for centralized support columns and utility components. Each home's floor plan wouldn't need to be interrupted by obtrusive beams. The tandem buildings are so light they appear to float above the lakefront when viewed from the water. These buildings represent a design aesthetic that would be cloned frequently in later years. Still, if Chicago renters want to know what life is like in an original mid-century masterpiece, they should look up apartments for rent at 900-910 North Lake Shore. 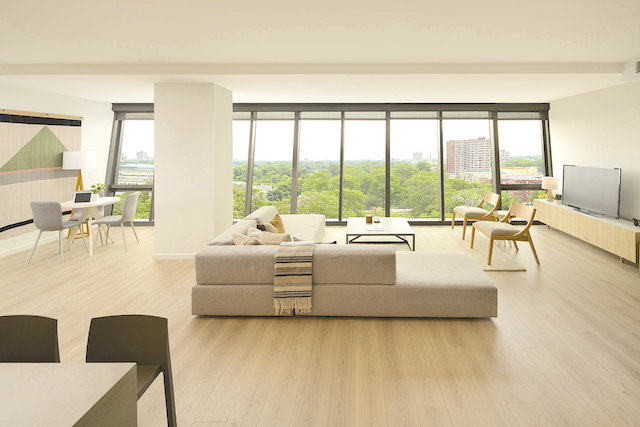 Solstice on the Park Apartments

An innovative building belongs next to a museum that showcases breakthroughs in science and engineering. Jeanne Gang's Solstice on the Park offers more than brilliant views of the Museum of Science and Industry. The south-facing windows at Solstice on the Park are tilted at a particular angle to minimize heat penetration during the warmer months without losing light during the winter, allowing for maximum energy efficiency. The angled windows on the building's southern facade create a nifty space for outdoor balconies at these Hyde Park apartments. 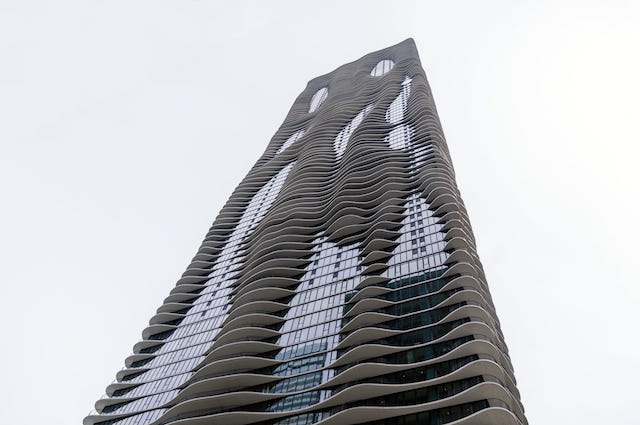 The dramatic facade of this building turns many heads. The undulating concrete balconies make wave-like patterns across the face of Aqua, which isn't just an arresting design detail from the mind of architect Jeanne Gang but also a pragmatic feature for residents. The curvaceous ledges that wrap around Aqua never overlap one another, meaning each apartment or condo in the tower gets its unique vantage point of gleaming skyscrapers or the sparkling blue surface of Lake Michigan. 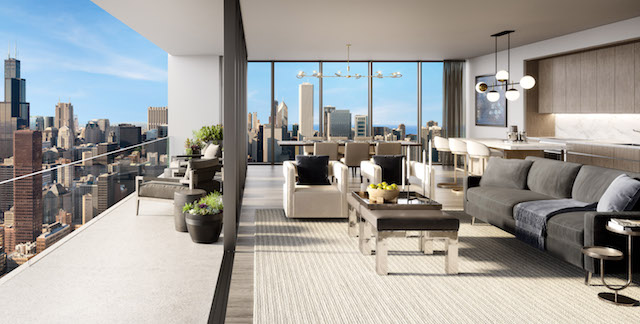 NEMA is a newcomer to the Chicago apartment and high-rise scene, but it's quickly proving to be a keeper. This South Loop skyscraper subtly conceals one of the neighborhood's most cutting-edge concepts in a sleek package: 800 rental apartments nestled into a stacked set of cylindrical tubes with squared-off edges, similar to the iconic design of the Sears Tower (now called the Willis Tower), with several different levels of amenities on offer and jaw-dropping views throughout the tower's 76 stories. Grant Park is at the doorstep, the Field Museum and Shedd Aquarium are a stone's throw away, and the rest of downtown Chicago beckons from this world-class location in the South Loop. 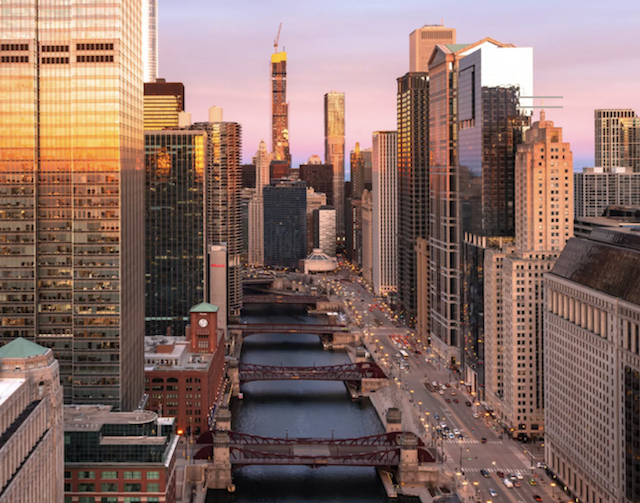 Hard to believe that this spot, where the north and south branches of the Chicago River come together, was only home to a nondescript newspaper office and a Holiday Inn for decades. However, this once-overlooked spot of River North real estate gave way to three glassy towers as the development of Wolf Point took off in the post-2008 recovery period. After completing the new apartment towers, including Wolf Point East, it became pretty obvious why a developer wanted to bet big on this spot. The views are some of the best in town, and renters can see the river carve a path through the mountainous high-rises of downtown Chicago each day, creating a visual feast for lovers of city vistas and architecture fans alike. 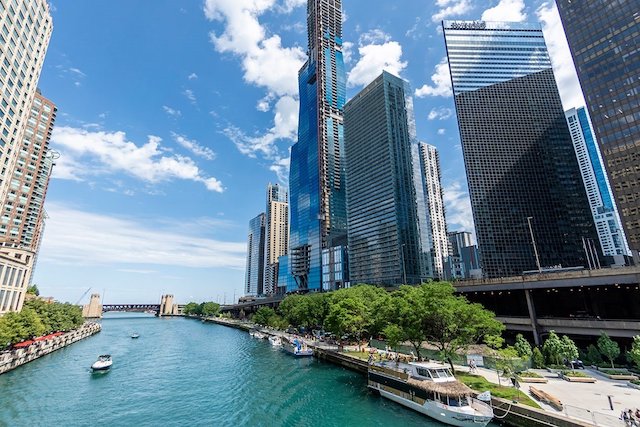 This stunning glass skyscraper on the south bank of the Chicago River was known as Vista Tower. After some shakeups in the naming rights as the building neared completion, it's now being called St. Regis Chicago after the hotel that will occupy the building along with 393 luxury units that borrow the upscale lifestyle of the luxurious hotelier. Residents who buy one of the condos in this Lakeshore East high-rise will have access to premier amenities, ranging from resident lounges to in-home butler service. Architect Jeanne Gang helped redefine the look and feel of the neighborhood with her landmark Aqua Chicago tower. This tower expands on her already impressive resume as a soaring stack of geometric glass pyramids that will serve as another identifiable highlight of the skyline. 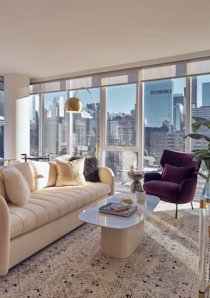 Apartments with the Best Views in Chicago 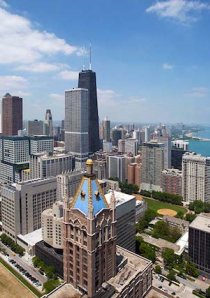 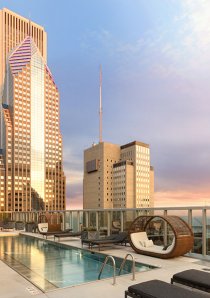