Chicago has been blazing a trail for supertall buildings that reach for the sky ever since the John Hancock Center (recently renamed 875 N Michigan) stretched to 100 stories back in 1969. In the half-century since the Hancock’s completion, a flurry of tall buildings sprang up around the world. Chicago apartments still benefit from the engineering breakthroughs that helped the Hancock rise to unprecedented heights all those years ago, and they offer renters something beyond the usual list of amenities for apartment buildings with their sweeping views, inspiring profiles and recognizable edifices that take their place among the city’s distinctive skyline. Here are the tallest apartment buildings on Domu right now for the renters who prefer to live the high life. 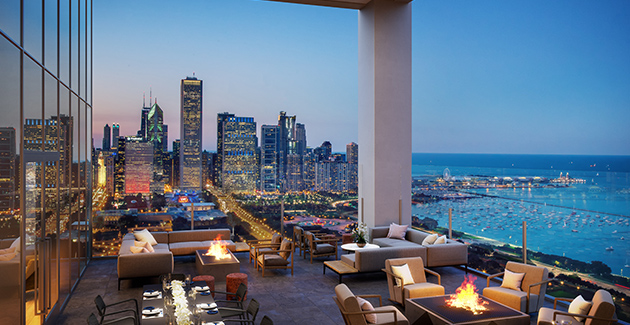 No other apartment building really compares to NEMA Chicago in terms of height. Sure, there are plenty of worthy mentions among Chicago’s list of Top 20 tallest buildings which contain residences. But to be fair, the only one that cracks that list and is 100% apartments is this South Loop tower. Renters at NEMA get a world-class view of Grant Park, Lake Michigan and the whole city. They can easily scope out northwest Indiana from the upper floors for added good measure. Beyond the views, residents at NEMA can enjoy practically every amenity imaginable. Why? Because with 76 floors above ground, there’s a lot of space for activities: basketball, arcade games, golf simulators, a boxing ring, gym equipment, dog run, on-site dry cleaning, and of course a swimming pool with a lounge area. 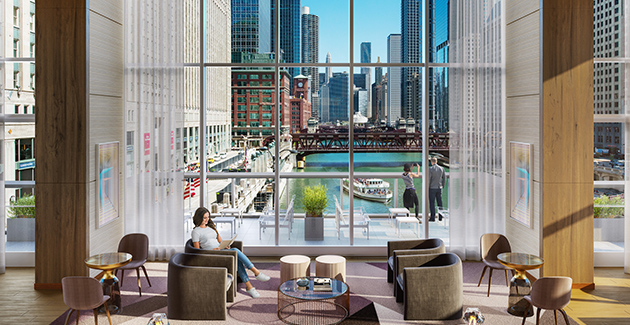 Renters can see all three branches of the Chicago River from a new vantage point at this luxury tower that rises an impressive 60 stories at the confluence of the river's north, south and main branches. Fun fact: the original Chicago civic symbol, the one that looks like a letter 'Y' and not the ubiquitous Chicago flag, was modeled after this geographic point of interest. Why? Some of the city's first non-native settlers would have frequented this spot. Wolf Point was the site of the burgeoning city's first hotel in the 1830s. Today, the scene is quite a departure from the rustic wood cabin that served as a gathering point along the city's waterway. Fantastic amenities and luxurious finishes await renters at this River North apartment tower in a historic location. 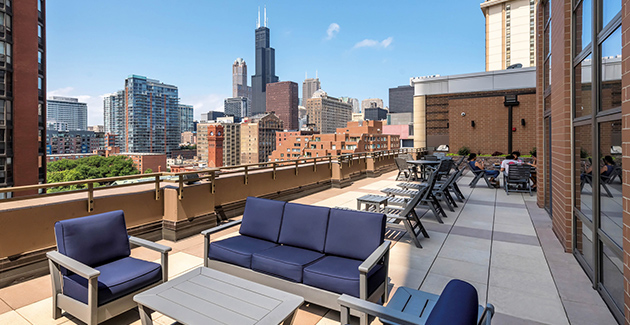 The competition of South Loop apartment buildings vying to be the tallest has picked up steam south of Roosevelt Rd. But look a couple of blocks north for the stately and classic Astoria Tower, which has appointed itself nicely in the intervening years since it topped out at 30 floors back in 2009. The neighborhood has more of a vintage character thanks to the many older brick buildings that remain standing near the Columbia College South Loop campus. Astoria Tower manages to rise high above the neighboring classic buildings without seeming outlandish, and it still offers a host of modern amenities to renters who call this building home. 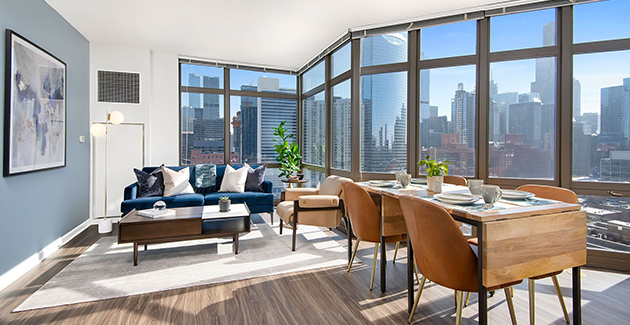 The Fulton Market neighborhood is well on its way to becoming one of Chicago’s hottest destinations, and from the lofty perches of this 36-story apartment building, renters can watch all the action. The neighborhood is sort of the fulcrum point between the foodie stomping grounds of the West Loop and the tony residences of River North. The gritty legacy of the area’s former meatpacking warehouses made it a sweet spot for artists and gallery owners who sought out cheap rents back in the late 1980s and early 1990s. Nowadays, renters who live in Echelon are more likely to come across fancy hotels and world-class restaurants in this well-connected neighborhood northwest of downtown Chicago. 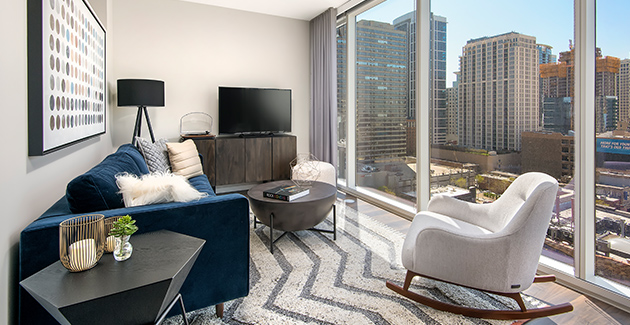 This recently constructed high-rise sits in a very nifty location around the corner from the Roosevelt CTA station. Even though there is a generous number of parking spots included in the apartment building, renters who rely on walking or public transportation will find a lot of appeal in the South Loop apartments at Eleven40. With grocery stores, restaurants and parks all within walking distance, Eleven40 stands out as one of the new high-rises that also raises the bar on convenience.